It’s been a busy month at work, but this morning, for the first time in two weeks, I monitored birds at Columbus Park. I saw 13 species of birds, including a Red-tailed Hawk whose tail was a mix of banded juvenile feathers and bright red adult feathers. However, I did not see the on-again-off-again Great Horned Owl who sometimes roosts in an oak tree on the west side of the Park. (Read about it here.)

I always enjoy seeing the owl, but when the owl’s gone I’m not too sad, because then I can search for owl pellets under its roosting tree. The pellets I’ve found so far (shown in this post) contained a mix of medium and small mammal bones, but no teeth. So I figured the owl was feeding on squirrel, rabbit, or maybe possum-sized mammals. Since I can’t often identify bones to species, I was really hoping to find some owl pellets with teeth or jar bones, which I often can identify. Today I lucked out:

Pellets spit out by the Great Horned Owl who sometimes roosts in Columbus Park. The large, snow-crusted pellet on the right includes a lower jaw. (Taken with my iPhone.)

Here’s a closer look at the jaw:

I dug the jaw out of the frozen pellet so I could see the teeth. With the front gnawing teeth and grinding cheek teeth exposed, I recognized it as the mandible (lower jaw) of a Cottontail Rabbit. (Taken with my iPhone.)

Go here to see a photo of a complete Cottontail Rabbit skull with mandible.

This fall we had lots more rabbits than normal in Columbus Park, and I’d noticed gnawing damage to shrubs and small trees that was probably the work of rabbits. My neighbors in Oak Park had also noticed more rabbits in their yards this year and complained about damage to their gardens.  So, now there’s evidence that our Great Horned Owl is bringing the rabbit population back to normal.

Here are links to information and activities about owl pellets:

As I monitored birds this morning in Columbus Park, I did an experiment. I took photos with my iPhone and uploaded them live to Facebook. It was kind of like a virtual nature walk!

Here the link to the public Facebook album with this morning’s photos:  A January Walk through Columbus Park.

Please let me know what you think!

For the past three days a Red-tailed Hawk has been hunting from lamp posts at the end of our block: 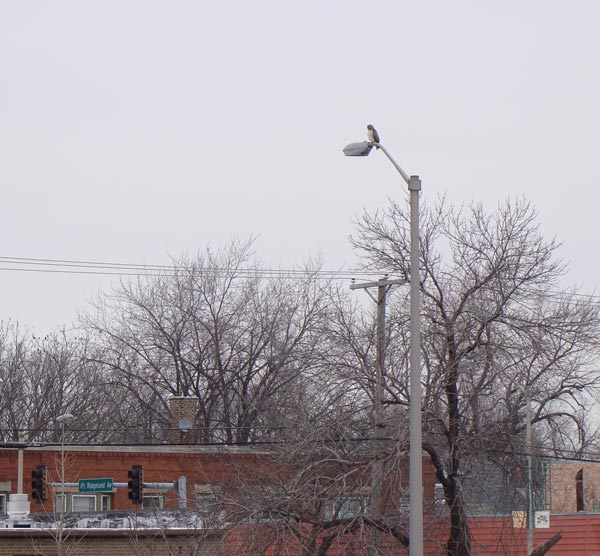 The Red-tailed Hawk sits on lamp posts at the end of our block. The posts are in the grassy median between the east- and west-bound lanes of Interstate 290 (also called the Eisenhower Express, the Ike, or the Congress).

I first noticed the hawk on Monday while I was walking to Maze Library across the Ridgeland bridge. I saw the hawk flying from post to post, approaching me from the east. Once it got close enough, I recognized it as the pale-bellied Red-tail that I’ve seen in Columbus Park, about a mile east on the expressway:

A few weeks ago I watched this hawk hunting Mourning Doves behind the Refectory at Columbus Park — it failed rather miserably. On Monday the Red-tail made a pass at Pigeons roosting on the apartment building at the end of our block — another fail. Then it flew directly at the large Red Cedar in our alley where House Finches and Goldfinches roost — the small birds scattered, and the hawk was not even close to scoring a meal.

Since then, every time I see the hawk it’s sitting on a lamp post:

The I-290 Red-tailed Hawk in south Oak Park.

It’s always look down, at least when it’s not looking at me. It’s probably hoping for a glimpse at a potential meal — a mouse, perhaps a rat, maybe a rabbit brave enough to cross three lanes of traffic.

I hope the hawk is more successful with mammals than it is with birds. And I hope it understands the dangers of speeding cars and trucks.

The I-290 Red-tailed Hawk on a distant lamp post.

Red-tailed Hawks often hunt along highway right-of-ways. Here are some links that discuss this aspect of Red-tail natural history: